This is a recipe adapted from one that my good friend Charles Ledvina gave me. I have only made it once — to good effect — so I am blogging this mostly so that I have an easy way to find it. If you find it useful, too, all well and good.

The first pizza as it came out of the over. The cheese is slightly toasted, because I left it in too long, hoping to char the crust.

Why make a pizza from scratch? Because even if, like me so far, you’re not very good at it, it’s still much better than any pizza that comes out of a box. The drawback is that, although it’s not too much work, it takes a long elapsed time — so you will need to get started on the dough either the morning of the day when you want to have pizza in the evening, or even the night before.

Get the oven as hot as it will go. A regular domestic oven such as mine tops out around 250 C. In that oven, pre-heat the trays that you will be cooking the pizzas on. Prepare your toppings: you want everything pre-chopped and ready to go straight onto the pizza so that the actual assembly can be as quick as possible.

Now you want to work quickly. For each of the four pizzas you’re going to make:

Now you can get to work on the next one while the current one is cooking. Depending on how long your oven takes and how quickly you can make each pizza, you might briefly have all four of them cooking at once; you will need to keep an eye on the pizzas in the oven (or have someone else do it) because they cook quickly. 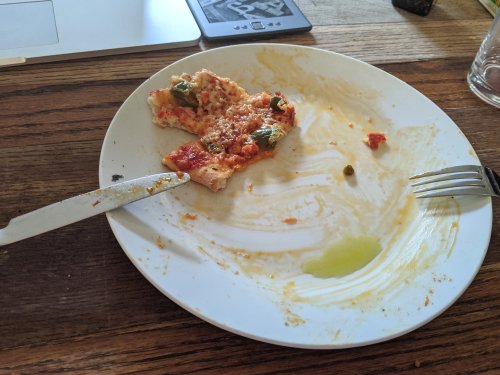 If you can get them, San Marzano tomatoes are said to be the best for pizza.

Authentically, pizza dough is never rolled with a pin, only stretched by hand. It may be that I’d be able to develop that skill in time, but at the moment it escapes me. When I hand-stretch, the dough gets much too thin in the middle and too thick at the edges, and it’s so elastic that it shrinks back too small. So it’s a pin for me.

Don’t overdo the toppings: aside from grated cheese, you really only want a small amount of flavourings — in my case, finely sliced chorizo and jalapeños. Don’t load the pizza down with lots of a vegetables that will ooze water and make the base soggy. (When I want to use vegetables — peppers and onions, most likely — I pre-chop them and let them dry out and partially roast in the oven as it is heating up.)

Only a really hot oven (not a domestic one) can char the crust, which is why in trying to achieve that charring I ended up slightly toasting the cheese on my first attempt. If you want really charring, you can achieve it by painting diluted honey onto the crust, but to me that seems like it dilutes the purity of the process.

I’ve made this again, for my household of five, very successfully. But everyone wanted more, so here are the ingredients upgraded to 5/4 as much, to make five pizzas instead of four. (This is mostly for my own benefit, so I don’t have to do the mental maths the next time I follow this recipe.)

This entry was posted in Food and drink, Recipe. Bookmark the permalink.

11 responses to “Making pizza from scratch”