What I’ve been reading lately, part 36

I don’t quite remember what the specific stimulus was for my starting to re-re-re-read Lewis’s classic Narnia books. But this must be at least the tenth time through, going back to when I was eight or nine. (These are often referred to collectively as “The Chronicles of Narnia” but that it exactly what they are not. They are stories, with no pretense to historic verisimilitude or exhaustiveness.) 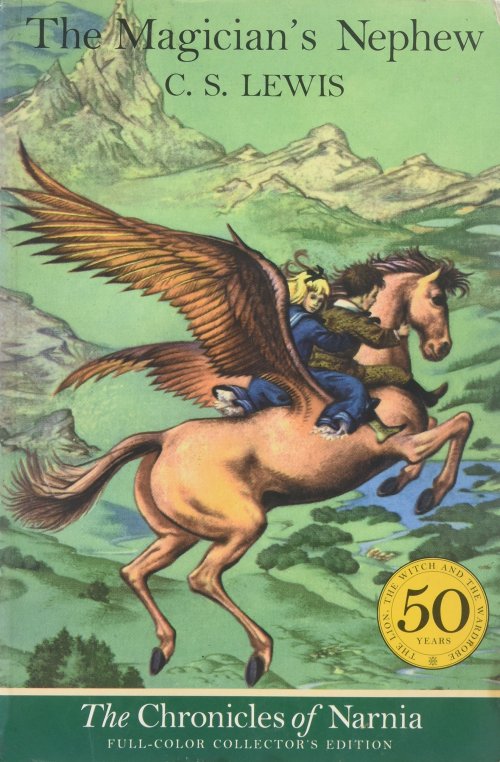 Why do I keep coming back? Because they are not only charming and enjoyable and exciting, but also profound. Lewis himself was quite up front about his intention with the Christian allegory that pervades these seven books:

I thought I saw how stories of this kind could steal past a certain inhibition which had paralysed much of my own religion in childhood. Why did one find it so hard to feel as one was told one ought to feel about God or about the sufferings of Christ? I thought the chief reason was that one was told one ought to. An obligation to feel can freeze feelings. And reverence itself did harm. The whole subject was associated with lowered voices; almost as if it were something medical. But supposing that by casting all these things into an imaginary world, stripping them of their stained-glass and Sunday school associations, one could make them for the first time appear in their real potency? Could one not thus steal past those watchful dragons? I thought one could.

These are not easy times to own the name Christian. The “Christian Right” in America seems to be persistently — we might almost think systematically — betraying everything Jesus ever said about how we are to behave towards each other. It pains me to share a name with groups that seem to show so little love, joy, peace, patience, kindness, goodness, faithfulness, gentleness or self-control — and which seems even to hold such qualities in contempt, as “snowflake” indicators.

That’s why I need to remind myself periodically of why I am and remain a Christian myself, in spite of the continuing pollution of that word. And the Narnia books are marvellous reminders. I simply can’t read them without loving Aslan (i.e. the Jesus character, who in the stories is a lion). I’m not ashamed to say they bring me to tears almost every time.

The Magician’s Nephew is the first of the seven stories in chronological order, but was the last-but-one to be written and published. It’s best seen as a prequel to the main-sequence books, so that the best one to start with is still the first one published: The Lion, the Witch and the Wardrobe.

Anyway: read them in any order; the Narnia books are rightly considered classics, and are fully worthy of their reputation.

This Other Eden — Ben Elton

Elton’s third novel, and maybe the first one in which his style has settled down into something more like what we’d expect from a novelist, as opposed to a stand-up comedian weaving a narrative around his routines. Early Elton was veery much about eco-armageddon, and this story is set in a world that is teetering on the brink of becoming uninhabitable. Rich people have claustrospheres — shelters analogous to the nuclear shelters some families had in the 50s — where they plan to retreat when the worst happens.  We follow the fortunes of a frivolous but charming Hollywood actor who gets caught up in a conspiracy involving ecological campaigners, Hollywood producers, and the claustrosphere manufacturers. It shifts at a quick pace, never stops being interesting, and is surprisingly moving in places.

One of the most self-contained and exciting of the Narnia novels, though it has of late been mired in (to my mind) baseless accusations of racism. It tells of Shasta, a Narnian boy brought up in the southern land of Calormen, who escapes to the north with a runaway Calormene princess, Aravis. Each of them has acquired a Narnian talking horse, and all four of these main characters have lessons to learn along the way.

As usual with the Narnia books, it is the character of Aslan who lifts them beyond being merely exciting stories for children into something altogether richer and deeper. But even without that aspect, there is much to love about the character of Bree (one of the two talking horses) who talks as though his understanding is very superior to that of this three companions, but who gradually learns how little he knows.

One of Lewis’s less known books, and really an overlooked gem. It begins from the observation that we use the same verb “love” in English to denote several quite different things, and explores four of them in depth: affection, which exists to some degree between almost all people who are familiar with each other; friendship, which is based on common interests and goals; eros, or romantic love; and what Lewis calls “charity”, an outdated term for disinterested love that desires the best outcome for the recipient.

As always, Lewis’s observations are sharp and pithy; I call to mind the memorable image of lovers (eros) looking into each others’ eyes, while friends are side by side both looking at the same object. His core point is that even the “lower” loves can mature into something holy, and that even the “higher” loves can become demonic and possessive.

Have You Eaten Grandma? — Gyles Brandreth

A book on the English language by Scrabble champion, ex-Tory MP and perennial Radio 4 quiz-programme guest Gyles Brandreth. This one is a strange blend of amusing anecdote, well argued positions, and long, tedious lists of rules. I quite enjoyed reading it once, but will not revisit it.

The very last of the mainline Discworld novels (followed only by a Young Adult book in the Tiffany Aching series). It’s understandable if it’s not among the best: honestly, the contemporary-invention-comes-to-Discworld seam had been mined pretty bare some time before this one, and of course Pratchett was suffering with dementia by the time he was working on it. So there is a disjointed quality to what feels in places like a jouneyman work rather than a creation of the passion that drove great Discworld books like Equal Rites, Mort or Guards! Guards!.

Still, all of this carping is a bit mean. In the end, it’s still a Discworld book, which means some well-loved characters, some interesting ideas, some enjoyable wordplay, and a plot.

It’s Not Me, It’s You — Mhairi McFarlane

McFarlane’s You Had Me at Hello was an unexpected delight, so when I saw this one discounted to 99p, I jumped at it. I’m glad I did. It tells the story of Delia Moss, a woman in her 20s who discovers via a misdirected SMS that her fiancé, Paul, is cheating on her, and who moves from Newcastle to London intending to start a new life. The story is interesting enough, as she lands a questionable PR job and has to deal with a difficult but likeable investigative reporter.

But the real value here is in the very gently painful explorations of Delia’s feelings as she goes through the process of trying to come to terms with Paul’s betrayal, feeling irrationally responsible, wondering if she can function in a new place, meeting his lover, considering getting back together with him, and so on. All of this is done with a very light touch, so it doesn’t derail the story, yet it has a compelling quality of reality to it — not unlike C. S. Lewis’s descriptions of his reactions to his wife’s death in A Grief Observed. It’s not every day that I find myself comparing a chick-lit author with Lewis, but in McFarlane’s case the comparison is not wholly fanciful. She has a laser-sharp eye for emotional detail, and for sketching it out in a way that is evocative without being manipulative.

This entry was posted in Books, Reviews, What I've been reading lately. Bookmark the permalink.