As a long-time 2000 AD fan (I read it from Prog 1 and stayed with it for three or four years) I’ve been reading David Bishop and Karl Stock’s fascinating Thrill-Power Overload: 2000 AD — the first forty years [amazon.com, amazon.co.uk]. When I reached the section about the 1995 Judge Dredd film starring Sylvester “Rambo” Stallone, I was interested enough to watch it; and having seen that, I was interested to see the 2012 take starring Karl “Éomer” Urban. 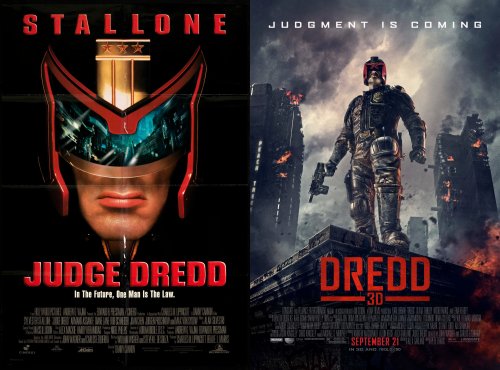 So how do they measure up?

I mostly enjoyed the Stallone film, while not particularly feeling that it had much to do with Judge Dredd. My favourite moment was a little bit of world-building near the start, as a droid moving around a dilapidated tenement dolefully intones “Eat recycled food. It’s good for the environment, and OK for you.” But Stallone is completely wrong for the part, and everything about the film screams that it was created by a committee. The script is a rewrite of a rewrite of a rewrite, and it shows.

The premise is lifted from an early issue of 2000 AD: Dredd’s brother Rico returns from imprisonment seeking revenge. But the execution bears no resemblance whatsoever to the original, and loses all the sly humour of the comic in exchange for what is basically a romp. Dredd’s helmet is off before the end of the first act, and (spoilers) the film ends with him kissing Judge Hershey. The Angel Gang make an appearance, but they’re all dead before we can start to get a feel for who they are. It’s a strangely out-of-place bit of a fan service in a film that otherwise seems to be trying to escape from its roots.

Famously, Judge Dredd tanked at the box office, killing off hopes of a sequel and financially damaging 2000 AD itself. I can’t really regret that — it’s not a very good film and didn’t deserve to be a hit.

The film was so universally panned that it killed the character of Dredd for cinematic purposes. It took 17 years before someone took another stab at it — and, to be fair, critics have been kinder to Dredd (2012).

Not me, though. I found it a thoroughly nasty film, extremely violent and with a lot of the violence happening in very detailed slow motion. There seems to be no artistic justification for this — director Pete Travis just seems to have thought it would be cool. Instead, it’s the kind of violence that makes a film a depressing grind. So while I enjoyed the Dredd/Anderson interplay (credit to Urban and to Olivia Thirlby, who looks disturbingly like Veronica Mars), I was ready for the film to end long before it did.

The utter depravity of the bad guys was also unpleasant to witness. Perhaps it was done that way to make us overlook the very obvious fascist-police-state nature of the Judge system. It certainly had the effect of making me not feel sorry for them when they were, inevitably, mown down. But again, it has a grindingly unpleasant quality that left me wanting to take a shower.

The biggest failing of both films, for my money, is their absolute failure to catch the tone of the comics. While comics-Dredd is often exciting and threatening, it’s also often funny and satirical. Mega-City One in the comics — despite its inner ugliness — is a visual feast: an elegant maze of twisty towers and elevated roadways. But in the 1995 film, it’s merely downtown LA; and in the 2012 one it’s any slum anywhere, but with strangely evenly spaced gigantic tower blocks. The design has no vision, which is unforgivable when there is so much vision in the source material.

Speaking of which, one of the big mistakes of the 2012 film is that it’s almost entirely (except for the first and last few minutes) set inside a tower block. OK, it’s a big one — a kilometer high, apparently — but once you’re inside it, one tower block is much like any other. So the film devolves into a much less clever, witty and likeable Die Hard. There’s none of the sheer scope and epicness of the Judge Dredd we know from the comics. We’re told the population of Mega-City One is 800 million, but from what we see it could be a few hundred.

Similarly, while the earlier movie ventures out into the Cursed Earth, it turns out that the Cursed Earth is really tiny. It’s more like a deforested Central Park than a 2,500-mile-wide radioactive wasteland.

Putting it all together, both films are deeply disappointing. Someone, somewhere, might one day make a satisfying and enjoyable Judge Dredd film; but it won’t be until someone who knows and loves and gets the originals is at the helm. To fans of the comics, my advice would be to skip both of the extant films.

This entry was posted in Movies, Reviews. Bookmark the permalink.