Rebottling over-carbonated beer: a tragedy with a happy ending

A few months ago I made some homebrew beer. But I bottled it prematurely — it hadn’t got far enough through fermentation — and so it kept generating more pressure in the bottles. A few of those bottles were glass: two of them exploded. Most bottles were plastic, and they inflated. When I opened a bottle to taste, it went absolutely crazy and shot all the beer out all over the place.

To get some advice, I emailed Andy Farke, who brews fairly seriously. He said the least worst approach would be to open all the bottles, capture what beer I could, and rebottle it. I attempted this a couple of days ago.

My first plan had been to open all the bottles, then just set them down until the fizzing stopped, and decant from bottle to bottle to make some of the partial bottles full and the remainder empty. But that plan quickly failed for two reasons. First, essentially all the beer spurted out of each bottle — in some cases very violently — leaving maybe 5% of the total volume to recondense from the froth that remained in each bottle. And second, the inflated bottles had had their bottoms pushed out into a concave shape, so they won’t stand up.

Plan B was to use the tub that I originally brewed the beer in: opening the bottles inside the tub, allowing them to spray all they wanted, but capturing the spray as well as the liquid inside the tub.

Some of the bottles were very violent when they were opened. Three of them leapt out of my hand and punched me quite painfully in the chest. Another shot right up in the air and landed (so far as we can tell) in the next-door garden. We never recovered it.

In the process, I got absolutely soaked in beer. It’s not as much fun as it sounds. 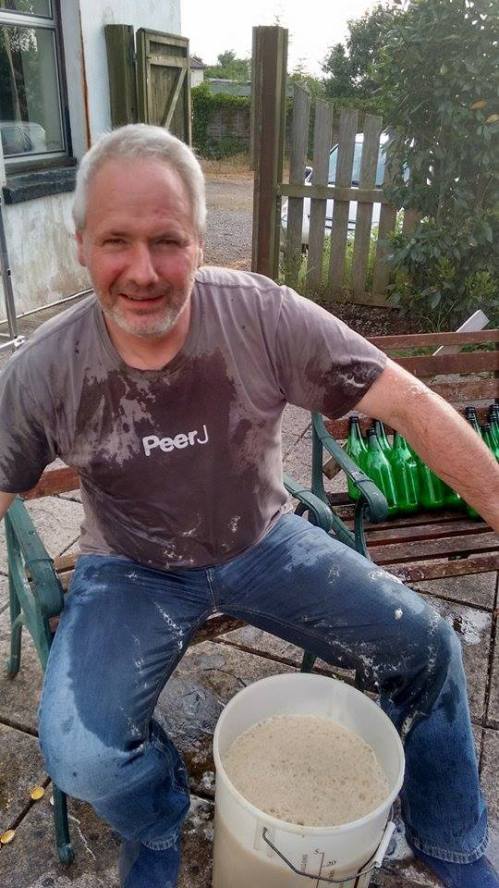 The happy ending: when I did the re-bottling a day and a half later, I recovered about 30 bottles’ worth of beer, from something like 45 that I’d started with. So perhaps two thirds of the beer survived, which is a lot better than I’d expected.

(Though heaven only knows what it will taste like when I finally risk opening one of the re-bottled bottles.)

I admit this experience has made me less keen than I was on home-brewing. On the other hand, it has given me a new interest in buying beer.

This entry was posted in Beer, Life. Bookmark the permalink.

5 responses to “Rebottling over-carbonated beer: a tragedy with a happy ending”