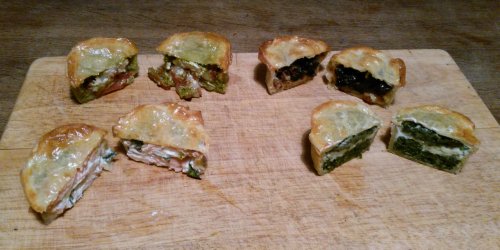 This time, I wanted to get more filling relative to the amount of pastry, so I did three things differently. First, I used a simple shortcrust rather than shop-bought puff pastry; second, I rolled it very thin; and third, I used ramekins rather than a tart tin.

I rolled the pastry out very thin — a bit too thin, as it turned out — cut it into circles, and formed it inside the ramekins:

I didn’t make the initial circles quite big enough, so I didn’t get the pastry hanging over the edges as I’d hoped. Also, I found it hard to avoid getting folds in the sides, due to the ramekins really being too straight-up for this. Oh well.

I decided to try blind-baking in a way that would retain the shape. I lined the pastry with foil: 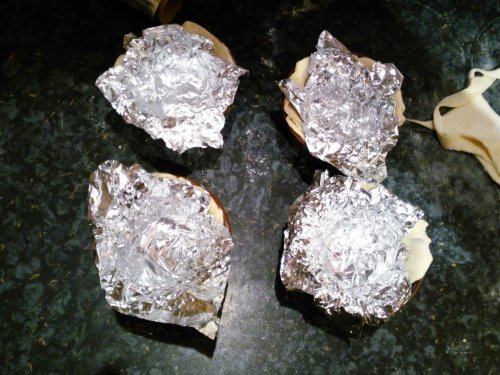 And I added uncoked rice to weigh it down:

This didn’t really work super-well. With such small pies, the foil didn’t go right into the corners, and I had to be very careful not to get raw rice mixed in with the pastry. I might try using clingfilm next time instead of foil; and perhaps invest in some baking beads.

Here’s how the pastry cases came out after eight minutes at 200 degrees C: 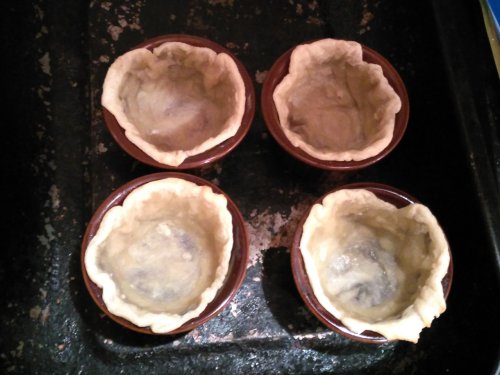 Once I’d removed the rice and foil, I brushed the cases with beaten egg and baked them for another eight minutes:

As you can see, there were a couple of bubbles, especially in the bottom left one, but they were easy to push down. Now we came to the fun part: the fillings! I’d assembled the ingredients for my four pies while the cases were cooking:

Here are the pies with the ingredients layered in, before the lids went on. Top left: goat’s cheese, pesto and sun-dried tomato. Top right: stilton, walnut and prune. (Note that these two flavours are combinations of the ones I used in the savoury tartlets). Bottom left: cream cheese, smoked salmon and basil. Bottom right: spinach, egg and parmesan cheese. 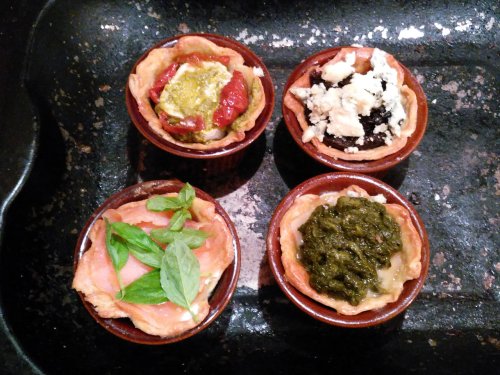 (I used tinned spinach, and drained it by squeezing it against the side of a mug with a spoon. That worked out well enough, but if I were doing it all again, I’d also add a little salt and pepper, and maybe a bit of coriander, to the spinach.)

I rolled the remaining pastry thin, and cut it out using an old Lidl prawn tub to get circles of the right size: 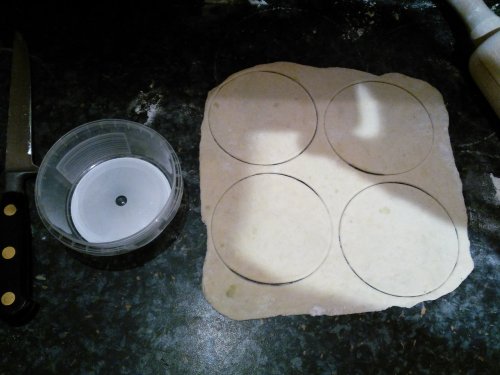 Here are the pies, with their tops on and an egg-wash, before they went back in the oven:

And here they are after ten minutes’ baking:

Proof that they’re my own work:

(I believe this is my first ever selfie.)

I left them to cool for fifteen minutes before removing them from the ramekins: 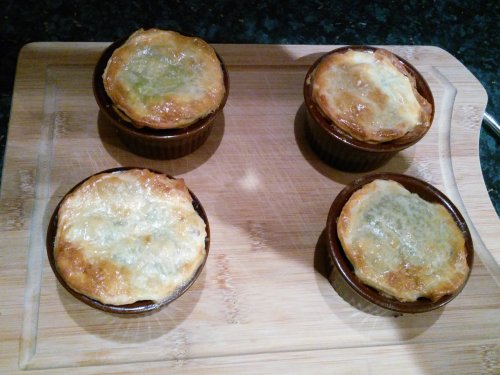 They came out reasonably easily: one or two them needed to have some cooked cheese cut away from the rim before they’d drop out, but I’d greased the ramekins with butter so they were easy enough to remove:

Once they’d cooked, I cut them all in half, to see how the layers had come out. First, the cream cheese, salmon and basil pie (front) and the goat’s cheese, pesto and sun-dried tomato (back): 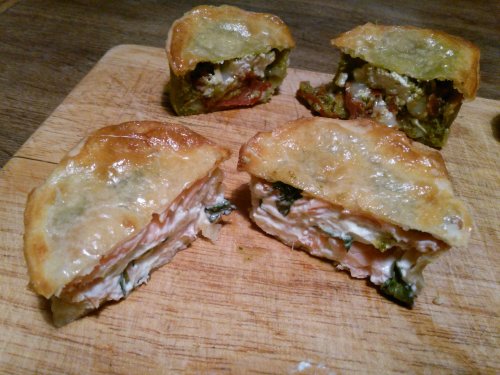 As you can see, the goat’s cheese one is a bit of a mess cosmetically, but the salmon one has kept its internal structure quite nicely.

Now, the other two pies: stilton, walnut and prune (back) and spinach, egg and parmesan (front).

The stilton pie has no recognisable layers at all, but the spinach one has come out with really nice, clear layers. I’m pleasantly surprised by that, as the egg went in liquid. (It’s about half of an egg: I used the rest for the egg-wash.) I poured it in over the first half of the spinach, then covered that with shavings of parmesan, which was evidently enough to stop the second spinach layer from bleeding through.

So how did they turn out?

Pretty awesome, to be honest. Each pie was delicious. Fiona and I agreed that the stilton, walnut and prune one was the best — a glorious combination that’s likely going to become a signature dish. You can’t go wrong with goat’s cheese, pesto and sun-dried tomato — it’s a delicious combination. But I’ll need to find a way to make the structure stronger. The spinach pie was good, but definitely needed more seasoning. And finally, I used too much smoked salmon, so that its saltiness was too strong. Another time, I’ll either just use less, or try using raw salmon fillet.

These were all good, though. I’d definitely do it again (hopefully better!)

This entry was posted in Food and drink, Recipe. Bookmark the permalink.