Oh, Doctor! How are you going to get out of this one? (The Magician’s Apprentice)

Somehow I’d managed to avoid all spoilers. Which is great, because The Magician’s Apprentice took me by surprise, repeatedly. The moment when the boy in the field of hand-mines told the Doctor his name raised the hairs on my arms. I was genuinely creeped out. 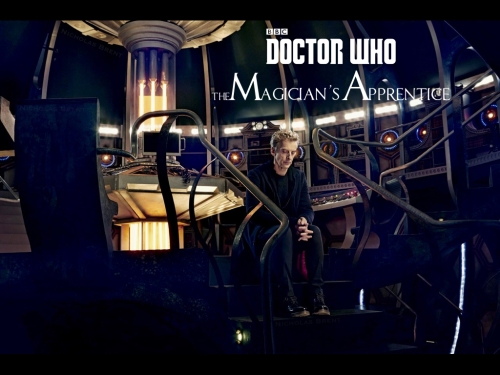 What to make of The Magician’s Apprentice, then? For a start, it’s hard to know what the title alludes to. It’s not clear who the eponymous magician is; and if it’s the Doctor, as seems likely, I can’t imagine who we’re supposed to think is the apprentice. I wonder whether this is a terribly clever title which we’ll all understand after part 2; or whether Moffat was merely lumbered with the title due to the “The Doctor Will Return In …” caption at the end of the Series 8.

But, yes, part 2. Because this was the first half of a two-parter, something I didn’t realise until near the end. (The price you pay for avoiding spoilers is that you also avoid knowing basic stuff like this.) I’ve repeatedly written about the need for more two-parters — especially in the Series 7 part of my book, which I can’t conveniently link to as those are the only chapters that don’t exist online. But, hey, you could always buy a copy. It’s much better than this review, which keeps digressing. See, I’m doing it right now!

Where was I? Oh yes, the multi-partness. I’ve repeatedly lamented that the structure of Series 7 — split across two years — left it trying to get through too many stories in a short time, and that as a result each of the stories was a single-parter. My feeling is that New Who has usually been at its best in two-part stories (The Empty Child/The Doctor Dances, Army of Ghosts/Doomsday, Human Nature/Family of Blood, Time of Angels/Flesh and Stone). Even when two-parters don’t really work, they tend to fail in interesting ways, or at least while raising interesting issues (The Rebel Flesh/The Almost People). And I loved the 50th anniversary special, Day of the Doctor, which was presented as a single episode but had a two-parter-like running time of 76 minutes.

And the reason multi-part stories work better is that it’s simply not possible to set up an interesting and complex situation, and resolve it, and show us something about the characters, all in 45 minutes. There are plenty of episodes that make a very good stab at it, but I am increasingly coming to the conclusion that either the running time should be upped to a full hour, or there should be a lot more two-parters. (Remember that back in the old days, most stories were four or even six episodes long. Even given that episodes were only 25 minutes long back then, that still gives us total running times of 100 to 150 minutes.)

So The Magician’s Apprentice benefits not only from having time to breathe — to fully explore, for example, the scene where Clara meets Missy in the plaza — but also from leaving us in the lurch: not so much with a cliffhanger as a situation in which the cliff has already been hung, and we’re left wondering how it can be unhung. Having surprised me with the minefield child’s identity, the episode then surprised me even more when the Master was exterminated; then upped the ante again when Clara followed. So that’s a powerful way to end an episode and leaves a lot of questions open … 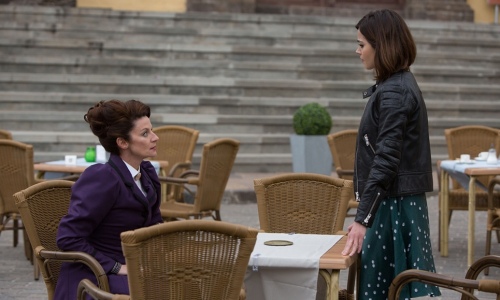 … except that unfortunately the acting doesn’t really sell it. I think that during that golden period when we had Matt Smith’s Doctor, Karen Gillan’s Amy and Arthur Darvill’s Rory, we got too used to pretty much every moment being pitch-perfect. Now that we have a manifestly inferior cast, it’s being shown up by comparison. Peter Capaldi is good, but he’s no Matt Smith, lacking the younger man’s subtlety. Jenna-Lousie Coleman’s Clara has never really convinced outside of her debuts in Asylum of the Daleks and The Snowmen. I started to seriously lose patience with her in The Rings of Akhaten, and I’m afraid that nothing she’s done since has changed my mind. Tonight, once more, she seemed like a cipher. In the plaza meeting with Missy, it was impossible to tell what she was feeling: fear, outrage, boredom. It was impossible to tell whether she was planning anything. Worse still, when threatened by the Daleks just before her extermination, I couldn’t even read basic fear on her face. The contrast with Gillan’s painfully naked terror in Flesh and Stone is frankly embarrassing.

And as for Missy … She was fine when she was a mysterious character, glimpsed here and there in little cameos. But now that she’s moved to centre stage, the character is revealed as a shallow complex of random tics that has no depth or substance to it. It disappoints me deeply that no sooner is River Bleeding Song finally and unequivocally dead (please tell me she is finally and unequivocally dead!) we get another character playing essentially the same role with essentially the same mannerisms — all arch flirtation, references to a shared past, and mysterious utterances that are supposed to indicate depth or wisdom that the character painfully lacks.

So what we’re left with is a plot that is aiming for a richness and heft that the cast are simply not capable of conveying. Although I welcomed Capaldi’s appointment as the new Doctor, feeling that an older man would lend a different kind of gravity, I am sad to say that when he’s called upon to convey a powerful emotion — as when pleading with Davros not to have Clara killed — he doesn’t quite make it fly. I’m not saying he’s a bad actor. But in Matt Smith, he has a very tough act to follow, and he’s just not quite up to it.

Also: do we really want to be invoking Davros, the Master, the Sisterhood of Karn, the Shadow Proclamation and the Daleks all in the first episode? Where does it leave us to go?

And do we really want to be rewriting the origin myth of the Daleks? What this does, intriguing though the idea may be, is to leave us with episodes that once more are about the Doctor himself, rather than about the worlds he visits, the monsters he defeats, the conflicts he defuses. I have a much higher tolerance of this kind of thing than some other reviewers. But there comes a point where even I start to want to see an episode every now and then where the Doctor is merely a wanderer who gets caught up in events, rather than the axis around which all the events spin. 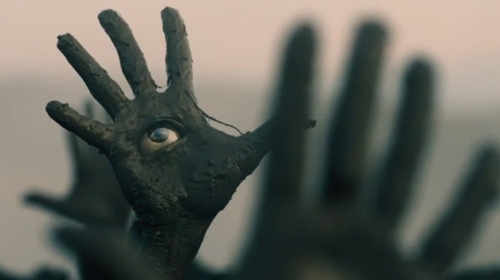 So where does all this leave us? It leaves us with an episode that had some truly chilling moments and arresting images (the hand-mines emerging from the ground, Davros in his TARDIS-like hospital ward), and some intriguing ideas. But it leaves a lot of work to be done in The Witch’s Familiar if we’re going to get to the end of this story feeling satisfied.

And then I hope for something much smaller scale — an Ark In Space, or a Midnight, or a Robot. Something where the story has no option but to carry itself on its own merit, and can’t use the crutch of going “Oh, look, the Master!” and “Oh, look, Davros!” every five minutes.

Hmm. I seem to have finished this review in a grumpy mood. Grumpier than when I started writing it. I think Clara may be the biggest reason for this. She just doesn’t appear like a real human being to me. And that is fatal in the companion, who famously is supposed to be our viewpoint character. She is, in fact, Amy Lite, just as Martha was Rose Lite. What this series needs, and I never thought I’d say this, is a Donna.

This entry was posted in Doctor Who, Reviews, Series 9. Bookmark the permalink.

11 responses to “Oh, Doctor! How are you going to get out of this one? (The Magician’s Apprentice)”