I’ve been spending a lot of time in the music of Joni Mitchell recently, and I wanted to share an observation. It’s not news that her music is all about subverting expectations — see for example the ubiquitous use of the unresolved suspensions that she terms “chords of inquiry”. Here I want to draw attention to a few places where she makes consecutive parts of her lyrics contradict, or at least reinterpret, each other. 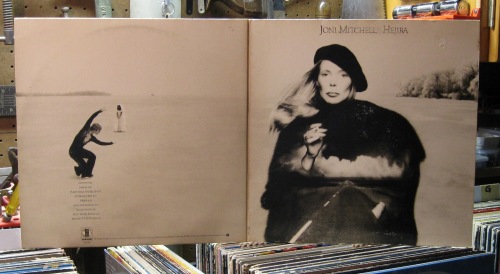 Consider for example these lines, from the opening verse of Coyote, the song that opens the Hejira album:

Lines 1 and 2 set up an expectation that the song is about intimacy. Then line 3 (“And still feel so alone”) immediately subverts that and tells us that, on the contrary, this is all about alienation — about how physical proximity does not mean emotional closeness. Then straight away line 4 (“And still feel related”) flips that interpretation on its head, setting the scene instead for a song that’s about the contrasts between intimacy and loneliness. In three lines, she has set three different expectations for the song.

This density and richness is not an exception. Consider these lines from the same album’s A Strange Boy:

We got high on travel
And we got drunk on alcohol
And on love, the strongest poison and medicine of all

If anything, this is even more dense. It changes direction three times in three lines. From the first part of line 1, “We got high”, we assume some kind of drug is involved; but no, we got high “on travel”. So then when we hear line 2, “And we got drunk”, we assume it’s going to be on love; but no, we got drunk “on alcohol”. The big-R Romantic is brought immediately down to earth. But then line 3 turns it all on its head once more. We did get drunk on love, after all; both poison and medicine.

This is superb writing because it creates and resolves tension with an intensity that comes from the chaotic tumble of reconsiderations. These lines (and those from Coyote above) don’t just tell us a conclusion, they show us the process of reaching it — or indeed of failing to reach a conclusion. They give us the complexity of an inner life, rather than just the sterile final form of the ideas. Had Joni written “And we got drunk on love”, as we expect to hear, the couplet would work. But by making us wait another half-line for the arrival of love, she does more than just tease us: she shows us her own indecision and ambivalence.

Then there is this, from All I Want, the opening song of 1971’s Blue album:

This one, you really need to hear sung: the second line is sung as though “I want to make you feel” is a complete unit. The meaning is: I want you to feel something, not just to sit there inert and unresponsive. But then, held off so long that it is almost a separate line of its own, comes the word “free”. A single word transforms the meaning of the line that it ends. It wasn’t a cry of frustration after all; it was a heartfelt wish to be a blessing.

Or, rather, it’s neither one of those things nor the other; but the combination of both. By holding back that one word, Joni has given us two ideas for the price of one, and consequently an emotionally richer song.

All that from one word! Can she improve on that?

Oh, but she can! Check out this couplet from Same Situation, on the Court and Spark album:

Here, in two lines, Joni captures the conflict that lies at the heart of almost all her work: the coexisting desires for committed love and for the freedom to pursue her art. But in this formulation, she sounds self-pitying: “love I don’t seem to see” suggests that the choice is taken away from her by circumstances.

But no! You have to listen carefully to this one: as the word “see” drifts away into the distance, she articulates one more sound: “z”. And the line is transformed into:

And my search for love I don’t seem to sieze

She’s not blaming circumstances; she’s accepting her own culpability in failing to build a relationship that works. The love is there to be seen, and indeed seized; she’s not seizing it.

This is much more than just a clever trick. As so often with Joni, the emergence of the second meaning represents not a correction but a tension. She’s not clear even in her own mind whether her inability to find love is because it’s not there for her or because she isn’t taking hold of it. Both meanings remain, each complementing the other.

This kind of thing is why I love Joni’s records even more than those of Paul Simon, Carole King, Richard Shindell or Dar Williams. I’ve used the word “density” several times here, but that’s exactly right. You get more for your money with Joni Mitchell. Every song offers multiple layers of meaning, each subverting or complementing the previous and the next.

This entry was posted in Joni Mitchell, Music, Thinking. Bookmark the permalink.

14 responses to “Joni Mitchell: subverting expectation line by line, word by word and phoneme by phoneme”