I’ve waited 30 years for this, but on Saturday 23rd, at the O2 Arena in London, I finally saw Paul McCartney live!

A Day in the Life, All My Loving, Back Seat of My Car, Drive My Car, For No-One, From Me to You, Get Back, Getting Better, Good Day Sunshine, Goodnight Tonight, Got to Get You Into My Life, Hello Goodbye, Here, There and Everywhere, I Will, I’m Down, I Want to Hold Your Hand, Jenny Wren, Jet, Love Me Do, Michelle, Mull of Kintyre, My Love, No More Lonely Nights, Penny Lane, Pipes of Peace, Say Say Say, Sergeant Pepper’s Lonely Hearts Club Band, She Came In Through the Bathroom Window, She Loves You, She’s Leaving Home, Silly Love Songs, The Fool on the Hill, The Girl is Mine, The Night Before, Uncle Albert/Admiral Halsey, When I’m Sixty-Four, With a Little Help from my Friends, With a Little Luck, You Won’t See Me, Your Mother Should Know.

… and these are just some of the songs that he didn’t play*.

Here is the actual set-list. Can there be anyone in the history of popular music who has accumulated such a ridiculous repertoire? And these are not just songs that he’s played and sung on, but (with two exceptions) songs he also wrote, in whole in or part. (The exceptions from Saturday’s show: John’s Being For The Benefit of Mr. Kite! and George’s Something — both very welcome inclusions.)

I doubt anyone would dispute McCartney’s position in the pantheon of great songwriters. But the question was: can he still sing them?

Yes he can. I’d heard it said that his voice is on the way out, but if that was true a couple of years ago (his performance at the Queen’s diamond jubilee concert was widely considered disappointing) then he’s got it back. He’s as clean and emotive as he ever was in songs like The Long and Winding Road or Blackbird, and still screams with the best of them on Maybe I’m Amazed and Helter Skelter.

Not only that, but he plays instruments constantly. At his age, no-one would blame him if he let a band handle the instrumental duties and restricted his own contribution to singing. But instead, he switched constantly between his trademark Hofner violin bass, two pianos (a grand and an upright) and a sequence of electric and acoustic guitars.

One negative: the O2 is a pretty poor arena, largely just because it’s so huge that that you’re a long way from the stage and the sound is inevitably echoey. I think you might get a better sound from in front of the stage (even if it involved being further away) rather than at the side, as we were. So I’ll know that for next time.

Many thanks to my old friend Jon Wensley for arranging the tickets!

(Also great to see very positive reviews of the show in the Guardian, in the Telegraph, and in the Independent.) 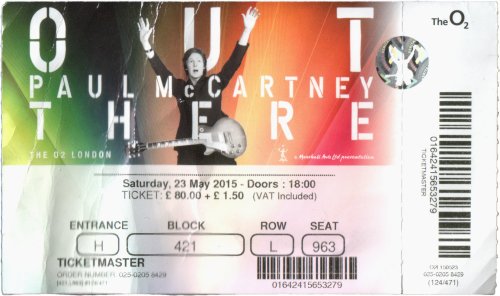 * I stole this opening gambit from Andrew Hickey’s review of a McCartney concert in 2011. It was just too good not to re-use.

This entry was posted in Life, Music, Reviews. Bookmark the permalink.