I’ve been on Twitter for a couple of years now, first as @SauropodMike and more recently as @MikeTaylor. I have to admit, it’s hugely surpassed my expectations. I thought it was a medium for the trivial, but instead I’ve found a wealth of pithy observations, witty asides and links to all sorts of fascinating longer reads. 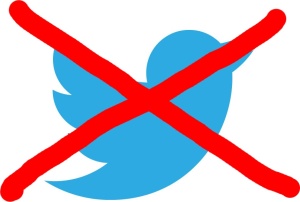 So now I’m leaving it.

The problem is not that Twitter is trivial — it’s precisely the opposite. It’s immersive and informative and, most of all, time-consuming.

I follow 300-odd people, and they’re pretty much all fascinating in their various ways. They link to hefty articles about weighty matters. I read a lot of these. As a result I am much better informed now than I’ve ever been before, about a whole swathe of issues. Not only open access, which I’m passionate about, but British freedom-of-speech erosion, the US government shutdown (thank heavens they finally grew up), the astonishing rate of overnight imprisonment of children in the UK, and much much more.

These are issues that bother me deeply but that I can’t do anything about. Whereas open access is one that I can influence, in my small way. Knowing about all these other things is bringing me stress and unhappiness, but not opening a window for me to actually help. Avoiding that state is why I deliberately don’t follow the news in conventional media (TV, radio, newspapers), so it makes no sense that I’ve let myself get sucked into following news in this medium.

More important still, Twitter is just taking so darned much of my time. I tend to be quite a depth-first person, perhaps tending towards obsessive. The result is that whenever I get back onto my computer after a break, I feel an obligation to catch up on everything I’ve missed on Twitter, and to read all the interesting links. That’s eating into time I would otherwise use for blogging (hence how quiet it’s been here at The Reinvigorated Programmer), and for writing papers. It’s also slowed progress on another project I’m working on, which I hope to announce here in a week or two.

I’ll still tweet occasionally — not least, to let people know when I post something here or at Sauropod Vertebra Picture of the Week, and also to respond when I get an email notification that someone’s tweeted about me. But in general I’m going to treat Twitter as a read-only medium; and in practice that’s going to mean I’m writing much less on it, too.

Hopefully I can make better use of the hour a day, or however much it is, that I recover.

Anyone who’s been used to contacting me on Twitter can always get hold of me either by commenting on any of my blogs (I see all comments) or of course by good, old-fashioned email to mike@miketaylor.org.uk.