The Wedding of River Song (Doctor Who series 6, episode 13)

And so we come to the end of Doctor Who series 6.  So many questions to answer, so much ground to cover, so many ideas to tie together.  Were they answered?  Was it covered?  Were they integrated?  Will this so-called review consist entirely of questions? 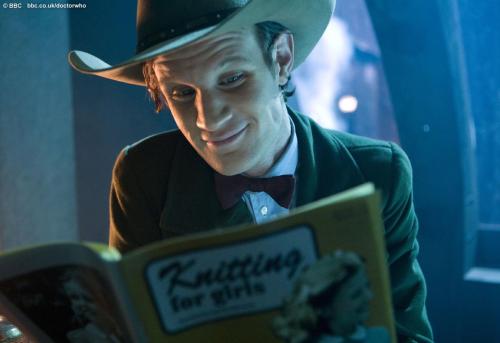 Read on after the break.  Needless to say, spoilers follow!

You could characterise Moffat’s work as Doctor Who show-runner as a constant surfing on the very edge of the possible.  It’s beyond question that he’s given us a much denser, faster-moving Who than ever before; and — most important — a Who that is richer in ideas.  The main arc of series 6 has included an at-times bewildering array of concepts, including more time-travel paradoxes than you can shake a stick at.  There are writers who you feel safe with — you know what you’re going to get from a West Wing or Frasier episode — and then there are the writers who might do anything.  Joss Whedon is one; Moffat is another.

When Moffat’s ideas work (which is more often than not), they fly.  Up to the start of this season, it’s been unquestionable that half a dozen or more of the best ten New Who stories have been his.  (The Empty Child/The Doctor Dances; The Girl in the Fireplace; Blink; Silence in the Library/Forest of the Dead; The Time of Angels/Flesh and Stone; The Pandorica Opens/The Big Bang; A Christmas Carol.  Candidates by other writers: Dalek, Father’s Day, Bad Wolf/The Parting of the Ways, Human Nature/The Family of Blood; Midnight; The Lodger.  Just so you know).

But a strange thing has happened as I’ve watched the four pre-Wedding Moffat episodes this year.  After each of The Impossible Astronaut, Day of the Moon, A Good Man Goes to War and Let’s Kill Hitler, I’ve found myself feeling only guardedly positive.  Positive, yes; I had a lot of good things to say about all of those episodes.  And yet they posed so many questions, and answered so few, that I found myself always reserving judgement — thinking “well, we’ll know how good it was when we’ve seen the next one”.  Delayed gratification is all very well, but it seems to have reached a point where no one episode makes sense alone — not just because you need to know what came before, but also what is going to come after, before you can form a coherent view of its events.

There have been times when I’ve wondered whether it’s getting to be too much work; but then the episodes in question have been so fascinating, and so funny, and so dramatic, that it’s been easy to look straight past the complexities — at least in the short term — and just enjoy the ride.  But the problem with that approach is that the episodes are writing cheques that the series finale needs to be able to cash.  It’s a tall order.

And the end of series 5, I felt that The Big Bang absolutely pulled it off — it answered most of the questions, and those that it left unanswered had the feel of next-series teasers rather than overlooked details.  Better still, it included very clever moments like the explanation of why the Doctor got his jacket back in the middle of Flesh and Stone — a true Mind Blown moment.  But it’s interesting to think about how Moffat did that.  When you’re learning to ski, one of the hardest lessons to absorb is that you need to point your skis downhill because that gives you much more control than staying side-on and skiing across the hill.  Full Speed Ahead And Damn The Horses turns out to be the best way to ski, and that’s the approach that the Grand Moff took in The Big Bang — starting out not by explaining the mysteries accumulated in previous episodes, but by piling on more mysteries.  Most notably, what the heck was Amy doing inside the Pandorica rather than the Doctor?  That was maybe the single most startling What The Heck?! moment of TV I’ve ever seen.

So The Big Bang worked, absolutely.

But then in A Good Man Goes to War, Moffat pulled the same point-the-skis-downhill manoeuvre by introducing a whole nother bunch of concepts — the Future Church now opposed to the Doctor instead of allied with him, the Headless Monks, the Sontaran nurse, the Silurian detective, The Pirate That No-One Really Wanted To See Again, and much, much more.  Again, it worked; but again, largely on sheer exuberance.  And, unlike The Big Bang, it left just as many open questions behind it as it resolved.  So it was satisfying as a mid-series semi-finale, if you will, but wouldn’t have done as the series finale.

Which finally brings us to The Wedding.  Just as a reminder (from the last post), we wanted to know 1. why the Doctor had to die; 2. why River had to be the one to do it; 3. why she had to do it in the form of an Impossible Astronaut; 4. why there was a Silent there; 5. why Present-Day River missed Old River with five shots from point-blank range; 6. why she said “of course not” after missing; 7. what the Doctor and the Astronaut said to each other; 8. how the Doctor could avoid death when Canton told us “That most certainly is the Doctor. And he is most certainly dead”; and 9. what is the “first question” that the Silence believe must never be asked.

Well.  We got answers to #1 (it’s a fixed point in time), #7 (we heard the conversation this time), #8 (it turns out it was a duplicate, and Canton was lying or mistaken), and #9.  No joy with the other five.  And these don’t seem to be the kinds of questions that will roll over into the next season.  It looks to me like they’ve just been dropped on the floor. 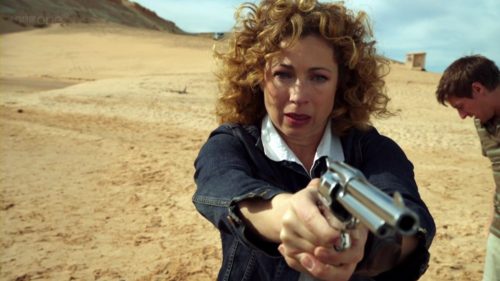 And this is a tragedy not only because it makes Wedding inadequate but because it also rewrites the earlier episodes and makes them less than they were.  There’s no question that the astronaut, the conversation by the lake, and the death of the Doctor were iconic images and memorable moments.  But what do they mean?, we all asked ourselves at the time.  Turns out, they mean nothing.  It might just as well have been Time-Grabbed Rory on a hang-glider, with the Lead Piping, in the Conservatory.  River’s missed shots and “of course not” were fascinating.  Now they appear to have been merely random.

So if I seem very negative about Wedding, I think that is the main reason: because its failure echoes back in time and lessens earlier episodes (a suitably timey-wimey phenomenon in itself).  It wasn’t just a lesser episode, it made the whole series a lesser series.

It saddens me because I thought Moffat had A Plan that would tie it all together and make it all make sense.  One of the great things about The Empty Child/The Doctor Dances, Moff’s first New Who story, was that it all made perfect sense in story-internal terms.  The strange and disturbing behaviour and abilities of the eponymous child really did follow reasonably from their cause; and it was a cause we were given all the necessary clues to guess if we were clever enough.  I would have said that tight, coherent plotting was one of Moffat’s greatest strengths — it’s certainly the main reason I was so delighted when I heard that he was to be Russell T. Davies’ successor.

It just felt … careless.  To pick one example, we were told very clearly back in Let’s Kill Hitler (by the teselecta robot) that “The Silence is not a species; it is a religious order or movement. Their core belief is that silence will fall when the question is asked.”  Yet now it seems it’s fine to ask the question — the problem comes if it’s answered.  There seems to be no reason for the change.  As far as I can see, it’s just bad continuity.

So there’s all this going on — more new concepts (time has stopped, the Doctor is for some reason a sort of court-jester/prisoner, Amy and Rory are “alternative”), important ideas from earlier dropped on the ground, and no resolution that makes sense.  (The Silents’ plan to kill the Doctor is incredibly convoluted, long-winded and error-prone even by the standards of Doctor Who villains.)

All of this I could forgive if Wedding had the flamboyance, the effervescence, the sheer joie de vivre of Moffat’s better episodes — including some from this series, but most especially The Big Bang.  But where that episode sparked with energy and made me laugh out loud over and over again, The Wedding of River Song felt laboured by comparison.  Unusually for a Who episode, I can’t recall a single moment that put me in danger of falling out of my chair at the sheer Whoness of it all.

So we reach the end of this series of reviews on a very unsatisfactory note.  I didn’t intend to write anywhere near so negatively about The Wedding of River Song as I have done, but I’ve found as I’m writing that my frustrations with it have grown clearer and clearer, with no corresponding growth in affection.

A real shame.  I thought early in this series that it was shaping to be the best I’ve ever seen.  But in the end, it’s less than series 5, and possibly also less than series 1 (though still better than 2, 3 or 4, sorry David!)

Next up will be the Christmas special — a presumably stand-alone story in which I hope we will see that Moffat has not misplaced his mojo.  For next series, I now have to sadly join the ranks of those who want to see the arc de-emphasised and a return to more of an anthology show.  If this series’ arc had been made to work it would have pushed Doctor Who to a whole new level.  But, uh, it wasn’t and it didn’t.

This entry was posted in Doctor Who, Series 6, TV. Bookmark the permalink.

39 responses to “The Wedding of River Song (Doctor Who series 6, episode 13)”