A couple of nights ago,  I watched The Hungry Earth, episode 8 of the new Doctor Who.  Among other things, it reminded me that I’ve not yet written anything about episode 7.  So let’s fix that.  And then I’ll go on to talk about episode 8 next time.

I had more a more fundamental problem with Amy’s Choice than with any other episode in the season so far.  I’ve tried to think of a way to discuss it spoiler-free, but I’ve not come up with anything.  So we warned that THIS REVIEW IS VERY SPOILY.

It’s a shame that this episode didn’t really work, because the premise is replete with opportunity — two alternative realities running in parallel, with the heroes switching between them.  Recent Who has dealt with alternative realities a couple of times, both of them very effectively (Donna’s realisation that her children are fake in Forest of the Dead was the single spine-tingliest moment in all of Who for me, and Turn Left was genuinely chilling).

In contrast with those two episodes, this one was set up as a puzzle,very explicitly and pretty early on: The Mysterious Stranger (hereafter TMS) turns up out of nowhere and explains the plot to the Doctor, Amy and Rory: one of the realities is real and the other is fake: they have to choose which is real, knowing that if they die in the fake reality they will simply awake in the other, and TMS will make the danger go away.  Stated baldly, this sounds like a transparently contrived dilemma; that it works as well as it does is tribute to good acting on the part of the three principals.

In both realities, things go quickly wrong.  The first, set on the Earth a few years in the future, has Amy married to Rory, who is now a Doctor, and very pregnant; idyllic (though maybe more for Rory than for Amy), until the village’s aged population turn out to be hosting hostile aliens who eat all the children, and then come after our heroes.

The second, set on the TARDIS, shows us a malfunction and loss of power, with the result that the TARDIS is pulled towards a frozen star.  It gets progressively colder until the Doctor and co. are threatened with freezing to death. 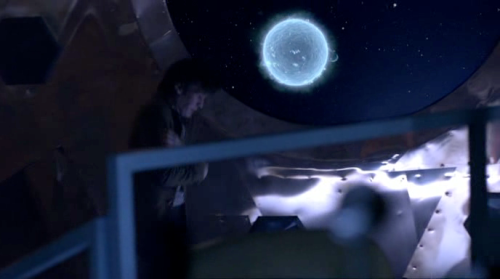 If you can overlook the artificiality of it all, and TMS’s frequent reappearances to act as master of ceremonies and occasional expositor, it’s not a bad setup: how can the heroes figure out which reality is the real one?

And it here that not one, not two, but three profound problems undercut the episode’s effectiveness.

First, nothing actually happens in the cold-star scenario.  Nearly all the time is spent in the alien-oldies world, so we’re not given a fair chance to compare them for implausibility.  What time we do spend in the TARDIS is mostly taken up with TMS’s gnomic utterances — which, to be fair, are interesting enough, especially when watching for the second time, but they don’t deliver what the setup promised.

Second, no-one makes any actual progress towards figuring out which world is real.  There is a funny moment when the Doctor waves his hand back and forth in front of his face and says he’s looking for video compression artifacts, and he emphasises that Amy and Rory need to be on the lookout for anything unusual (which as Rory points out is difficult given how weird normal life is for them).  But none of this leads anywhere.  It’s a rare example in the Moffat era of a plot line being dropped on the floor and forgotten — and all the more perplexing for its being, at least nominally, the central plot thread.

Third, and most cripplingly (and look away now if you’ve not yet seen the episode but you read on despite the spoiler warning above, because I am now going to get super-spoily), the entire episode is rendered wholly futile when it is revealed that in fact both scenarios are fake.  There never was a cold star, there never were alien-infested pensioners — the whole of both scenarios were induced by some kind of alien dream pollen.  This means, of course, that it mattered not one jot what happened in either of the worlds: the Doctor and friends could have just sat snugly waiting to be disintegrated by aliens/frozen by the cold star, and stuck their fingers in their ears and sung LA LA LA whenever TMS turned up to emit a plot fragment.

I said when reviewing the dreadful Buffy movie that any interest I had in proceedings was destroyed by the characters’ failure to take their own situation seriously.  But Amy’s Choice turns out to suffer from an even more foundational defect: it’s not just that the characters don’t believe in their world — its that they shouldn’t believe in it.  Heck, even the writers don’t.

So despite all its fine moments (and I did laugh at times, and I found the final revelation of TMS’s identity suitably surprising and thought-provoking), Amy’s Choice represents a horrible fumbling of the ball.  It’s not without merit, but the faults lie too deep for any amount of sugar to save it. 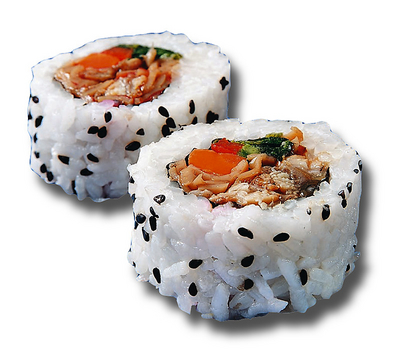 Shame.  Philip K. Dick made an entire career out of stories in which notions of reality were stretched, twisted, inverted and otherwise played with; some of his short stories have left deep impressions on me (his novels, not so much), among which The Electric Ant, Chains of Air, Web of Aether, and especially Faith of Our Fathers loom large.  [Note to self: must write article about how Faith of Our Fathers both parallels and utterly contradicts G. K. Chesterton’s brilliant novel The Man Who Was Thursday.]  Given the huge realm of possibilities that this kind of story offers, I didn’t expect to see the opportunity fumbled so badly under Moffat’s watch.

This entry was posted in Doctor Who, Series 5, TV. Bookmark the permalink.