I don’t plan to make a habit of starting my reviews of Doctor Who Series 5 before the episode airs, as I did with The Beast Below.  But I wanted to get my thoughts down about the Weeping Angels beforehand, because they worry me.  Although I’ve avoided watching the trailer for this week’s episode, it would hardly be possible not to know that it’s the first of a two-parter featuring these creatures.  Their only previous appearance was in the Tenth Doctor episode Blink, also written by showrunner Steven Moffat, which by common consent is among the very best episodes of the revived series.  Among other accolades, it won the 2008 Hugo Award for Best Dramatic Presentation, Short Form.  I concur with majority opinions here — Blink is quite brilliant.

But it achieves that brilliance by being something very different from a normal Doctor Who episode, and I think that would be a very difficult trick to pull off twice — especially if stretched across a two-part story.  Blink is a tightly woven story, a perfectly constructed machine — a crystalline confection that in some ways is more reminiscent of an Asimov short story or even one of the better Agatha Christie mysteries than it is of Doctor Who.  That’s not just because the Doctor himself is largely absent from the episode, but because it’s put together like a puzzle rather than an adventure.  (It also helps that the protagonist, Sally Sparrow, played by Carey Mulligan, is so easy to love.  I quickly found myself really wanting things to work out right for her, in a way that I usually don’t with one-shot characters.)  Every element of Blink is not just executed superbly but, well, maybe the word designed is what I want.   In fact — and this only now occurs to me — one can even imagine an analogy with recent articles on test-driven and thought-driven development: while most scripts are initially hacked together intuitively, then progressively refined in response to testing them out, you get the feeling that Blink was thought through in detail before a word was written down, and that it probably changed very little from the submitted script to the final production.  (I would love to know whether this imaginary history is actually true — maybe one day Moffat will publish his own Writer’s Tale — but whether or not it corresponds to the true sequence of events, this story gives a flavour of how Blink tastes and smells.)

Now here’s the point: Blink works as it does precisely because the Weeping Angels are not monsters in anything like the conventional sense.  They can’t talk; they can’t be negotiated with (as even the Vashta Nerada, somehow, could); they can’t make plans.  They follow a more or less predefined course.  Their behaviour is predictable.  The Doctor catches the notion quite nicely when he describes them as “predators” — in Blink, they no more interact with their victims than a lion does with a zebra.  That is by no means a weakness of the episode: the simplicity of the Angels themselves is what makes it possible for Moffat to fit such a delightfully complex story in a single 45-minute episode.  It’s exhilarating to watch the complexities unfold, to see bit by bit how everything that seemed so mysterious actually makes perfect sense, and to enjoy being in the hands of a master.

But it does make me fear for the two-parter that begins tonight, for two reasons.  First, I feel that the Weeping Angels have been done: we know what they are, we know how they work, we know what they do to their victims.  They are well-defined and tightly constrained.  If you like, they are a solved problem.  We could write unit tests for them and be pretty sure of passing.  That doesn’t sound like promising material for a sequel.

And second, I don’t see how the Angels can be made deeper or richer without fundamentally changing the nature of what they are — something that not only is hard to imagine being done well, but which also would retroactively rewrite Blink.  If the Doctor talks to them, figures out their plans, persuades them to change — in short, if he does any of the things that the Doctor does, that make him intrinsically Doctorish — then the Angels would no longer be intrinsically Angelish.

So I’m a bit worried.  But I’m not too worried because I trust Moffat in a way that I never trusted RTD.  I’m sure he’ll have thought of all the same things I’ve thought of, and much more besides.  And I am pretty confident that if he’s bringing the Weeping Angels back, it’s not just a recapitulate-my-greatest-hits manoeuvre, but it’s because he’s found a story where they can be used to good effect.  I can’t see how it’s going to be done (though my best guess is that there will be a story involving other people with complex motivations, and the Angels will be a sort of environmental factor that they have to deal with) but I am looking forward to finding out.

Don’t let me down, Steven!

It’s always hard to judge the first half of a two-parter, because you don’t know how the mysteries it sets up are going to be resolved.  In The Empty Child, for example, the mystery of the “Are you my mummy?” boy was established; and as it turned out, it was rather brilliantly resolved in The Doctor Dances, in a way that made perfect sense in the program’s own terms.  By contrast, the Daleks in Manhatten mystery of why the Daleks were turning people into pigs was resolved in Evolution of the Daleks as: They Just Are, OK?  So seeing The Doctor Dances enhanced the experience of The Empty Child, whereas seeing Evolution of the Daleks made Daleks in Manhatten seem weaker than on first viewing.  (The Doctor Dances also had the best cliffhanger resolution of any Doctor Who episode I can think of — “Go to your room!”  The contrast with the resolution in, say, The Age of Steel, is frankly embarrassing.)

So, with the caveat in mind that we won’t really know what to make of The Time of Angels until we’ve seen Flesh and Stone, I was impressed.  I admired how it handled the problems I discussed in my prologue.  I liked how very different the setting was from the mundane, intimate backdrop to Blink, and how the Doctor was thrown into a complex social situation early on.  And, being a sucker for time-travel paradoxes, I loved how River Song arranged her rescue from 12,000 years in the past.  (Even the casual use of the “12,000 years later …” caption was an elegant, understated joke, and all the funnier for it.) 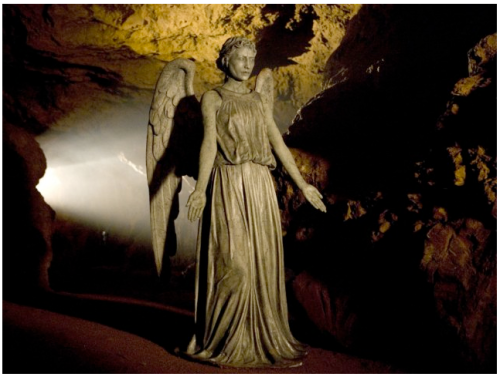 I don’t think I am giving much away when I say that the Angel is indeed given a way to communicate with the Doctor, and so becomes an actual monster rather than a mere trap.  Does this, as I worried above, mean that “the Angels are no longer intrinsically Angelish”?  Not really, because the Angel (there is only one, sort of) doesn’t communicate by any means as mundane as opening its mouth and speaking.  It’s artfully done.

Apart from communicating, the Angel seems to have acquired at least three additional powers beyond those seen in Blink, which is perhaps not very Occam’s Razory.  Maybe more like Occam’s Potato Peeler.  The Doctor passes this off with “The ones on Earth were weakened, just scavengers”.  Hmm.  I’ll withhold judgement until I’ve seen how those powers pan out, but I can’t help wondering whether three is too many.  So far, only one of them seems to be fundamental to the plot, but maybe in the second half the others will prove to be, too.

It’s good to see Moffat making proper use of the two-part format.  If single-episode Whos often feel rushed, the same is paradoxically often true of two-parters: for example, The Sontaran Stratagem/The Poison Sky felt very much like two separate episodes that merely happened to occur consecutively in the same setting.  Everything felt just as rushed and arbitrary as usual, but there was twice as much of it.  In contrast, The Time of Angels feels much more like the first half a single ninety-minute story.  The episode breathes; it takes time to stop and smell the chronovores — which is not at all the same thing as padding.  There is a sense that seeds are being sown which will germinate and bloom in the second part.  The mysterious man on the ship 12,000 years ago, the very very first sequence in what seems to be parkland(?), the insidious effect that the Angel recording is having on Amy: all of this feels like material that is pointing to something, leading somewhere.

The other way that the episode uses its first-half-fulness is by engaging us in a complex social setup.  The Doctor and Amy are joined very early on by River Song (from Silence in the Library/Forest of the Dead) whose relationship with the Doctor is complex to say the least.  They are shortly thereafter joined by a military outfit (and it just now occurs to me to wonder how they knew to be there at that time?), and then we have a four-handed game under way.  The Doctor seems, unusually, happy to work with the military on this occasion, ostensibly because the threat posed by the Angel is so great, but I wonder whether here, too, there are more surprises bubbling under the surface.  Thrown into this stew is a hint of a murky past (or maybe future) for River Song, which the Doctor doesn’t know about and wouldn’t approve of if he did.  It’s a rich concoction, and I really, really want to see the second half now, please!

(By the way, I didn’t notice an occurrence of the ubiquitious Crack In The Universe that’s been in the first three episodes; but that doesn’t necessarily mean it wasn’t there, unnoticed and uncommented.  I’ll keep an eye out for it the next time I watch.)

Finally, I would like to know what utter idiot at the BBC thought it would be a good idea to run a cartoon trailer for Over The Rainbow during the climactic moments of the episode.  Words fail me as I consider the monumental misjudgement involved here.  It’s as though Spielberg decided that, just as the shark is bearing down on Roy Schneider with the compressed air cylinder in its mouth, a Bugs Bunny cartoon should run in the corner of the screen.  Deeply, deeply wrong and wholly inexplicable.

Famously, a quiet and tense passage in the initial broadcast of Rose, the very first episode of revived Who, was ruined by having a fragment of the sound from a Graham Norton show played at the crucial moment.  Since Norton is also the host of Over The Rainbow, it looks suspiciously as though he’s on a one-man mission to crap all over Doctor Who.

Seriously, BBC.  I’m watching Doctor Who, which I paid for with my licence fee.  Let me watch Doctor Who.  When I am done with that, and only then, you may try to persuade me (though you will be unsuccessful) to watch Over The Rainbow.  But NOT DURING THE CLIMAX OF THE PRECEDING SHOW!  Arrrgh!

This entry was posted in Doctor Who, Series 5. Bookmark the permalink.